A Pyre of Pyrrhics

The Event of the Year!

This game is against Tim Porter, the Madaxeman, himself! So there are two different reports of this game from both sides of the virtual table, for his YouTube video, click here.

I first heard about The Mad Axe Man in mid July, 2016. I was invited for a weekend at Walt Leech's, whose man cave is a war gamers heaven. I was greeted as the "American Mad Axe Man". I had no idea who he was, but realized that I had a fan base. Which was both frightening and humbling. At that time, I had about 40 Ancients related battle reports to my credit, about a dozen for L'Art de la Guerre. I had been doing writing battle reports since at least 2011, and have 80 for other AAR's in other, themed blogs*. 3 games went by, followed by a long drive home, some new pictures to post and I forgot all about him.

Over the next year or so, at tournaments, I would give my opponents a spiel about what I was doing, and would they mind if I took pictures during the game, and littering the board with dead markers, and giving them the choice to opt out, because it is their game too, and I didn't want to take the fun out of it for them.

To date, none have, but a few wish to be anonymous for reasons of their own.

And every once in a while, one would say, "Oh, like Madaxeman".

Well you only have to kick me 4 or 5 times before I get a clue and I looked up his web site.

The man is nuts. Without exaggeration, he has been doing this for decades. It takes me 3-4 hours to do a single battle report, adding flavor text, sometimes telling a story, so I limit my postings to one a week, to give everyone a chance to read it before posting another one. Tim will put up 5 at once. With word bubble conversations between the figures, interleaved with relevant videos, post action commentary by Hannibal and Scipio, on a web site with all kinds of support for the game.

In short, he was better at this than I, by a lot, he puts the time in and it shows.

We started a small correspondence, comparing "how to's". Mostly for my benefit. And it was in great anticipation when I heard he was coming to Cold Wars, 2020, and I thought we can play a game, and the viewers will get to see both perspectives. This has only happened to me once before, in a Flames of War Tournament. It's cool. But it was not to be. I bowed to pressure about the plague spreading across the land and opted out.

Both Tim and I have a number of games under our belts using Table Top Simulator so the we have over come the wonkiness of the interface and played a game last week.

The Board:
Pyrrhic wins the initiative and elects to attack in the plains.

With a perceived advantage in cavalry, Pyrrhus goes for a minimum of terrain, a field and a road. The Romans place two plantations and another field. Their placement rolls are perfect, as the Romans fit perfectly between the plantations.

The original plan was to dismiss the Roman Cavalry, then attack their foot with my cavalry nibbling on the edge. That plan is out the window.

I have never run Pyrrhic before. It is interesting in that it has a lot of choices.

One organizational mistake, my main battle line is 7 elements wide. So in addition to taking an additional command point for the elephant moving short, it also takes another additional point for being too wide.

I do expect the main line to do well. I have elite Hypaspists next to the elephant, then ordinary pike, which should do well against Roman Legionnaires. The Hoplites on the ends are more for providing flank protection then attacking, as they can actually turn and move on one command point.

Meanwhile the Roman Legionnaires, who have noticed how sloppy Pyrrhus's center command is advancing, decide to show them how it is done, with hob nailed sandals, they advance at a quick march.

On the Roman right, the Ascensci handle cavalry as they have been trained. They advance and don't stop. Flanking Pyrrhus's elite Xystrophoroi, daring them to charge.

Changing the view to overhead. Which is how I normally play, but forgot to adjust it earlier. From this angle, the elements are much easier to adjust with the user interface.

The Xystophoroi charge. Better now, then later as the Romans will charge with flank advantage.

Normally, Heavy Cavalry charging Heavy Spearmen is not a good idea, but when the Cavalry is elite and the spearmen mediocre, its not so bad. The Cavalry will eventually win 57% of the combats.

In a normal Heavy Cavalry to Heavy Spearmen, the odds of the cavalry winning is just 19%.

Pyrrhus made one error, instead of rallying the Tarentines, he should have disengaged the Greek Cavalry.

I remembered to disengage the Greek Cavalry, and the Xystophoroi this time. But committed a rules violation, where another of the Greek Cavalry disengaged against their Roman Medium Cavalry counterparts. Which is not allowed.

But his bravery cost him, as he didn't have enough command points to turn his pike to face the oncoming Roman charge, which, in the end, cost him the battle.

So what went wrong?

Throwing out the original plan was a good idea, however, the cavalry command still committed to combat. They should have postured and parsed off a sizable chunk of the Roman army and let the main battle line go to work.

On the left, my Samnites were out tacticed, as Tim was good at selectively avoiding the two elite impact units, only to be defeated by drastically unfavorable dice on his part. He also secured a tactical advantage and had favorable dice on the main battle line. But he would not have turned it's flank had my cavalry played the game they should have.

* My other blog sites:

And visit Marvin the Martian at 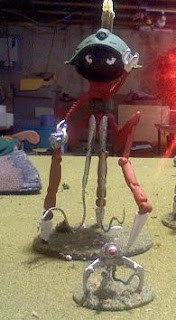 All Quiet on the Martian Front

Posted by Phil Gardocki at 6:01 AM